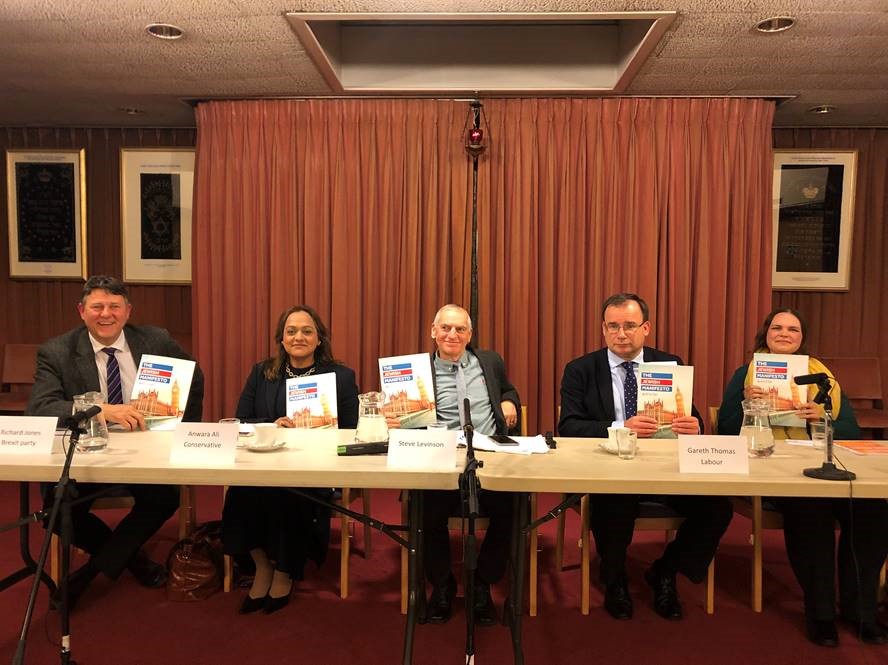 Local issues including knife crime, and homelessness featured prominently when four of the candidates standing for election in the Harrow West constituency attended an election hustings at Mosaic Community in Bessborough Road in the week before the election took place.

The seat was held with a majority of over 23,000 by Gareth Thomas for Labour in 2017 but issues like anti-semitism in the Labour party were forecast to make the outcome less clear cut on Dec 12. In his opening statement Mr Thomas described the anti-semitism in his party as a “scourge” and apologised to the Jewish community and in particular for the way in which fellow Co-operative sponsored MP Louise Ellman had been forced to quit Labour. When asked by the chairman, journalist Steve Levinson, why Jeremy Corbyn found it so difficult to apologise in the same way he said he did not understand his leader’s stance.

Each of the candidates gave a 2 minute opening address. Conservative candidate Dr Anwara Ali stressed Conservative pledges to increase the numbers of police, teachers and nurses, while for the Lib Dems Lisa-Maria Bornemann said Brexit needed to be stopped and major issues like climate change and the state of public services needed to be addressed. Richard Jones for the Brexit party was clear that the referendum result had to be honoured and a new immigration regime implemented.

The chairman challenged Dr Ali on the current state of the NHS which, as a GP, she was part of, while Richard Jones said while Harrow was a Remain area, he was committed to the Leave cause. Lisa Maria Bornemann, admitted that it was unlikely the Lib Dems would form the government and be able to revoke Brexit.

An audience of about 50 local voters, half of whom were members of Mosaic, made it clear they were concerned about crime, begging in the streets and the closure of walk in medical centres. Gareth Thomas pointed out that crime had increased since a police restructuring had affected South Harrow Police Station, but gave examples of local initiatives which were needed to deal with crime and gangs. The Conservative record on the health and the number of new nurses being promised were both challenged by the audience.

The Lib Dem and Brexit candidates disagreed on the best approach to immigration, whether it should be on a points based system or more broadly on human needs.

The meeting ended after 90 minutes with Rabbi Kathleen thanking all the participants for taking part and fielding a wide range of questions.