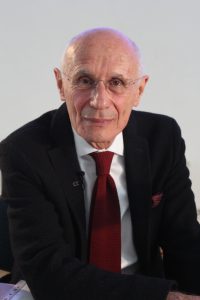 Over 80 people tuned in to this weeks ‘Meet the Author’ session, where Steve Levinson interviewed Peter Lantos.

If you missed the interview you can view the recording by clicking the link below.

By the age of 30, Peter Lantos had survived Bergen-Belsen concentration camp, was beaten by the Communist police in Hungary, qualified in medicine, defected to England, sentenced to imprisonment for this “crime” in his absence and had established a brilliant career in academic medicine in London.

After retirement, Lantos started a literary career. His first book, Parallel Lines, based on his childhood experience of Bergen-Belsen has seen four reprints, was translated into Hungarian, Italian and German, and sold some 12,000 copies.

His first novel, Closed Horizon, is a vision of the near future in the Republic of Great Britain, where conflicts between individuals and the Surveillance State create complex moral dilemmas.

Since then he has completed five plays; the first three had been published in a volume with the title Stolen Lives and chronicles three turning points in recent history: the Holocaust (The Visitor), the 1956 Revolution in Hungary (Distorting Mirrors) and the fall of Communism (Stolen Years). His fourth play (Light and Shadow) is the story of the extraordinary love affair between the French painter James (Jacques) Tissot and Kathleen Newton, an Irish Catholic divorcée with an illegitimate child in prudish Victorian London. His latest play (Bread from Air – the strange case of Dr Haber) exposes the Janus face of science through the contradictory legacy of Fritz Haber who, by discovering how to produce fertilisers, was a saviour of humankind but also, by using poisonous gases in World War One, the father of weapons of mass destruction.