What better way to introduce the Mosaic Cultural Hub, Mosaic Jewish Community’s new-built synagogue on Stanmore Hill to the wider community than with a multi-faith concert with a theme of PEACE!  As the Mosaic credo is “Choose your Jewish Life” – the choice of ‘peace’ for the first cultural event in the building is complementary to this motto. Within the 300-strong audience were representatives from diverse faith groups in the area, as a celebration for the end of Inter-Faith Week.  The concert was superbly organised by Jane Prentice, Chair of MJC’s Community Group and, after a welcome by the Chair of the Reform Community, Harry Grant, the four Rabbis of the community began with a Hebrew blessing of gratitude for new joyful events.

The concert was a fusion of jazz ensemble and choir, with psalms as the focal point. The inspiration for this is an idea of the Reverend Margaret Scrivener, who introduced the performance, and who realised that jazz music would be a good vehicle to marry with the words of the psalms – “they feed my soul” she describes. It would introduce jazz to some believers, and belief to some jazz fans. With the backing of the star jazz singer, Jacqui Dankworth, and the composing talent of jazz virtuoso pianist David Gordon, the project was created and Mosaic Jewish Community brought into the picture for its first performance.

David Gordon produced three new compositions for Psalms 22, 100 (‘The Gates’) and 139 – all world premieres for the occasion. With the beauty of the words, the emotion and feeling that Jacqui Dankworth spread through the music, enhanced by the jazz motif and superb playing of the group, and backed by the Take Twenty Choir, it was an outstanding evening .

The solo performances of Chris Garrick, on jazz violin playing a Muslim inspired Msunduza with joy and humour, and Tim Garland on saxophone with a soaring rendition of Search for Peace, were great cameo moments in the programme. The Take Twenty choir, of Camden, directed by Ben Cox, performed a selection of their repertoire, including I Left My Heart in San Francisco, Somewhere (West Side Story) and a rousing Smack Dab InThe Middle.

Jacqui opened with three charming and poignant pieces, Butterfly’s Wing, Le Départ, and Please Answer, which set a perfect tone for the evening and what was to follow. Her own lyrics for the Prayer for Peace show her versatility and a powerful message against war, and for hope – truly a message for our age.

David remarked that the plan is to perform these pieces many times, to expand and develop and reach more audiences. In particular he explained that his mother Tessa Gordon had commissioned the Psalm 100 for this performance – appropriately with its exhortation to “enter the gates with thanksgiving’. The gates of Mosaic Jewish Community opened here for the first of many events that hopefully will add to the variety and cohesion of the wider community, and the success of the Mosaic model, three strands of Judaism (Reform, Liberal and Masorti) sharing and co-operating, is a step along that path. 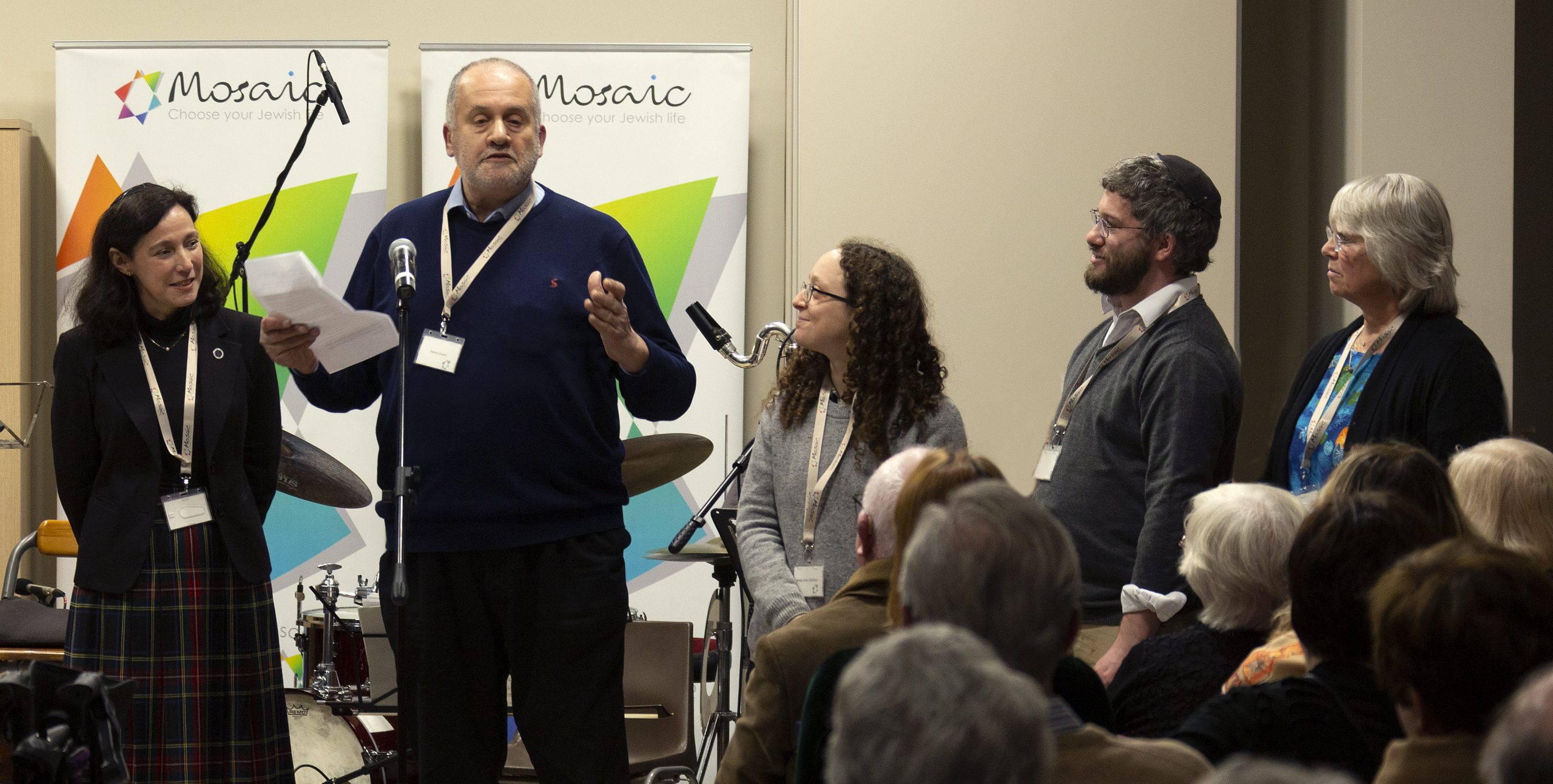