Ukraine rabbi talks of plight in his homeland 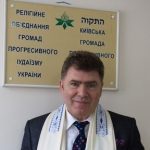 The trials and tribulations of life amongst Jews in the Ukraine were spelled out by Rabbi Alex Dukhovny, Chief Rabbi of the Religious Union for Progressive Jewish congregations in Ukraine during a talk at Bessborough Road recently.

He spoke about political and economic stagnation as well as the nightmare of waking up each day to hear ‘how many people had been killed and wounded during the night.’ adding ‘Putin is called Putler.’

Mosaic Liberal has been raising funds for the Ukraine congregations for many years through Kiev Koppers and on a more positive note he spoke of the boost to religious education thanks to their efforts and how Mosiac Liberal was his ‘spiritual home.’