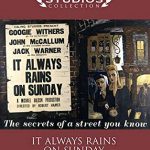 Reluctantly, in view of the Covid-19 pandemic, it has been decided to cancel the March showing of It always rains on Sunday. Needless to say there won’t be any film evenings for a few months to come. As unpleasant as it is to have to cancel an evening such as ours, it is far better to be safe than sorry. Hopefully things will eventually get back to some form of normality, and when that happens Film Mosaic will get going again. In the meantime watch good films on TV, and keep your eyes peeled for updates on the weekly emails. 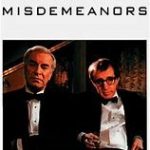 Judah Rosenthal (Martin Landau) is an ophthalmologist and a pillar of the community who has a big problem: His mistress, Dolores Paley, has told him that he is to leave his wife and marry her – as he had promised to do so often – or she will tell everyone of their affair. When he intercepts a letter Dolores has written to his wife Miriam (Claire Bloom), he is frantic and confesses all to his shady brother, Jack, who assures him that he has friends who can take care of her. Meanwhile, filmmaker Cliff Stern (Woody Allen) is having his own problems. He’s been working on a documentary film for some time but has yet to complete it. He and his wife Wendy have long ago stopped loving one another and are clearly on their way to divorce. He falls in love with Halley Reed who works with a producer, Lester (Alan Alda). Cliff soon finds himself making a documentary about Lester, hating every minute of it.Woody Allen’s bitter sweet comedy was nominated for 3 Oscars, 2 Golden Globes and 6 Baftas.  (Subtitles available) 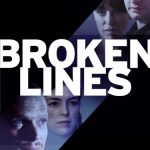 Multicultural London is the stage for this emotionally charged tale of desire, guilt and expectation. Jake (Dan Fredenburgh – The Bourne Ultimatum, Love Actually), a working class Jewish boy made good, lives in the suburbs with his beautiful but uptight fiancée Zoe (Olivia Williams – The Ghost Writer, An Education). When his father unexpectedly dies, Jake returns to his native Finsbury Park to deal with his inheritance. The dimly lit rooms of his father’s abandoned tailor shop, inhabited by ghosts of his past, become the setting for a passionate, illicit affair with a local waitress B (Doraly Rosa – Mrs Henderson Presents, Love Actually), similarly trapped in a frustrating relationship, with needy ex-boxer Chester (Paul Bettany – Legion, The Da Vinci Code). 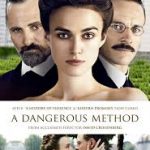 Suffering from hysteria, Sabina Spielrein (Keira Knightley) is hospitalized under the care of Dr. Carl Jung (Michael Fassbender) who has begun using Dr. Sigmund Freud’s (Viggo Mortensen) talking cure with some of his patients. She is highly intelligent, however, and hopes to become a doctor and a psychiatrist in her own right. The married Jung and Spielrein eventually become lovers. Jung and Freud develop an almost father-son relationship with Freud seeing the young Jung as his likely successor as the standard-bearer of his beliefs. A deep rift develops between them when Jung diverges from Freud’s belief that, while psychoanalysis can reveal the cause of psychological problems, it cannot cure the patient.  Released in 2011 and shown at the Jewish Film Festival, it was directed by David Cronenberg. Intelligent and sumptuous to look at, the Movie is an acting tour de force by its leads and is not to be missed.
“An Intellectual Menage-a-trois” The Evening Standard “**** The Independent”           “**** The Guardian” 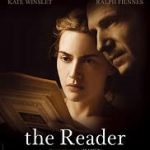 Teenager Michael Berg becomes ill and is helped home by Hanna (Kate Winslet – Oscar Best Actress), a stranger twice his age. Michael recovers from scarlet fever and looks for Hanna to thank her. The two are drawn into a passionate affair. Michael discovers that Hanna loves being read to and relationship deepens. Hanna is enthralled as Michael reads her many classics.  Despite their intense bond, Hanna suddenly disappears one day and Michael is left confused and heartbroken. Eight years later, while the now older Michael (Ralph Fiennes) is a law student observing the Nazi war crime trials, he is stunned to find Hanna back in his life – this time as a defendant in the courtroom. As Hanna’s past is revealed, Michael uncovers a deep secret that will impact both of their lives. Oscar Winner and nominee, THE READER is a story about truth and reconciliation, about how one generation comes to terms with the crimes of another. 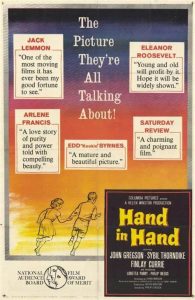 Little seen these days, Hand in Hand is the warm and genuinely touching story of Rachel, a young Jewish Girl and Michael, a Catholic boy, who form a tender relationship in 1950’s England, despite racism and bigotry from both sides. Starring John Gregson, Sybil Thorndike and Miriam Karlin.

Released in 1948, “THE SEARCH” was directed by Fred Zinnemann, and starred Montgomery Clift in one of his first major roles.  Zinnemann was himself from a German Jewish family and was forced to leave Germany years before as a young man. He made the SEARCH, in recognition of his lost youth and innocence. Making this film was a risk as it was released just at a time when Hollywood and the average filmgoer were beginning to come to terms with the true horrors and barbarity of the Nazi atrocities of the Holocaust. This little known black & white classic looks at the aftermath of the War and the Holocaust through the eyes of an innocent child and his GI friend, leaving us with a sense of hope.  It tells the moving story of one silent nine-year-old Czech boy, a survivor of Auschwitz, who flees a refugee centre in immediate post war Germany.  He is found and taken in by an American GI (Clift). At the same time, the boy’s mother, the sole surviving member of his family, is searching the refugee centres (UNRRA) for her son. Time, distance and the massive numbers of refugee children are factors hampering the reunion of mother and son.

Mosaic Film “This is Where I Leave You”

Released in the USA in 2014, this is a warm and funny movie starring Jane Fonda, Jason Bateman, Adam Driver and Tina Fey.  When their Agnostic Jewish father passes away, four grown siblings, bruised and damaged by their respective adult lives, return to their childhood home for the “Shiva”  and live under the same roof together for a week, along with their mother (Fonda) and an assortment of spouses, exes and ”might-have-beens”. Dealing with their shared history and the confused relationships among the people who know and love them best, they ultimately reconnect in hysterical and emotionally affecting ways amid the chaos, humour, heartache and redemption that only families can provide. What might have been a sombre, “heavy” film is instead a thought provoking but often hilarious look at 7 days in the lives of a dysfunctional but ultimately loving, caring, modern American family.

While subjected to the horrors of World War II Germany young Liesel (Sophie Nelisse), who is illiterate, finds solace by stealing books and sharing them with others. In the basement of her home, a Jewish refugee (Ben Schnetzer) is being protected by her adoptive parents (Emily Watson and Geoffrey Rush). This warm and moving adaptation of the best-selling novel, tells the story of a young orphan and the profound effect that she has on all those around her.  Donations for our chosen charity would be appreciated if you care to give.

This Israeli Film (Hebrew/French with English Subtitles) is simply one of the most dramatically charged, moving and intelligent movies I have seen in a long time. Viviane (Ronit Elkabetz) only wants one thing in her life; a Gett from her estranged  husband, Elisha (Shimon Abkarian), with whom she has not lived for a long while after a loveless marriage, which produced 4 children. The entire film takes place in two rooms in the Rabbinic Court, in front of three Rabbinic Judges, advocates and various witnesses. Despite this I did not find it claustrophobic. The script is electric, full of pathos and acidic humour. The acting is outstanding, pulling our sympathies in both directions. Whereas we might not agree with the religious basis of the “Gett”, we cannot help but feel for both protagonists, in very different ways. Tony Fineberg writes: “I can’t wait to see it again. One measure of a good film is the fact that you lose track of time. This one is 1hr 54 mins, and I didn’t look at my watch once!”