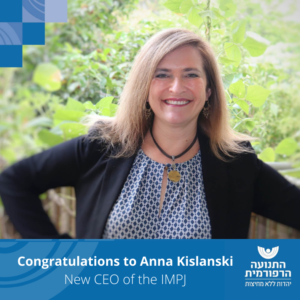 Chairperson of the Board of the Israel Reform Movement

A moment before entering the New Year I am thrilled, proud and particularly happy to announce that at the conclusion of a very serious and exhaustive search process, last Friday, September 3rd, the Executive Board of the Israel Reform Movement convened for an extraordinary meeting, together with the members of the search committee established several months ago, and decided to appoint Anna Kislanski as our next Director General. In doing so, the Executive Board met its own goal of appointing a new Director General before this Rosh Hashana.

Anna Kislanski began her professional career within the framework of the Israel Reform Movement almost 20 years ago, in 2002, as the Community Coordinator at Kehillat Or Haddash in Haifa. Between 2005 and 2009 she served as the Central Shaliach (emissary) of the Jewish Agency for Israel to the North American Reform Movement and since 2010 has held high level positions at the head office of the Israel Reform Movement in Jerusalem, including Director of the Community Development Division, and since 2016 as Deputy Director General overseeing Community and Education Activities. This past March, after Rabbi Gilad Kariv was elected to the Knesset, Anna agreed to serve as Acting Director General until the permanent position was filled.

Anna is deeply rooted in our Movement. With strong management skills, she brings strategic vision and the ability to deal with complex situations. Based on her management abilities, skills and vision for the future of the Movement, the Executive Board strongly believes Anna is the right person at the right time to serve as Director General. She will lead the Movement forward, expand its influence on Israeli society during the coming years, and will initiate steps to deepen that influence. I am convinced that you, friends and supporters of the Israel Reform Movement from around the world, join me and the Executive Board in congratulating Anna and in wishing her a hearty Mazal Tov and tremendous success in her new position.

Resources for understanding the current situation in Israel

Rabbi Rachel Benjamin has put together a few resources that might be helpful for people in trying to understand the current situation in Israel (as at 20th May, 2021).

Resources for Understanding the Current Israeli-Palestinian Crisis, from Rabbi Josh Weinberg, Vice Rresident for Israel and Reform Zionism for the Union for Reform Judaism (in New York) and President of ARZA.

Solutions Not Sides aims to tackle Antisemitism, Islamophobia and polarisation around the issue of the Israeli-Palestinian conflict in the UK.

The non-partisan programme has been formulated with the input of both Israelis and Palestinians as well as senior members of Jewish and Muslim communities, and is designed to prepare students to make a positive, solutions-focused contribution to debates on Israel-Palestine.

Some may want to support the initiative of the Abraham Fund to spread messages of hope and peace to stop the violence. You can do so here.

Many Progressive synagogues in Israel – including The Daniel Centers for Progressive Judaism, Kehilat Kol HaNeshama and Kehillat Mevasseret Zion – will be live streaming their services due to the current situation and would appreciate seeing people join from abroad and leaving messages of support.  You can support their work here.

Programs on JBS reflect and address the diversity and pluralism of the Jewish experience. The service does not represent any specific movement or organization in the Jewish community.

JBS is directed to every Jewish person with a sense of Jewish identity, and for members of the Jewish community seeking their roots.

Televised offerings are also for anyone with a passion for learning and a desire to gain a greater understanding of Jewish tradition, Jewish life, and the land of Israel.

i24News – is an Israeli international 24-hour news and current affairs television channel located in Jaffa Port, Tel Aviv, Israel. It broadcasts in French, English and Arabic.   You can also download the i24News app.

No Country for New Governments

Here are the personal thoughts of Judith Bara of Mosaic Reform on the current situation In Israel.

We all have personal thoughts at this tragic time.

I had hoped that by now I would have applauded the fact that for the first time in several elections Binyamin Netanyahu was no longer the prime minister of Israel and that a new coalition government of centre, moderate right and centre left parties was working on a policy agenda. This would not have detracted from the fact that the political system in Israel is broken and that serious efforts need to be made to introduce new procedures, especially electoral reform, in order to avoid the need for four elections in two years ever again. Perhaps there might even be hope for a renewal of decency, civility and fairness in government. It was not to be. END_OF_DOCUMENT_TOKEN_TO_BE_REPLACED

We are aware that more and more children within our communities have been attacked on social media as a result of the events that are happening in Israel.

Wishing you and your family Chag Shavuot Sameach, hoping that a ceasefire in Israel will be reached soon. 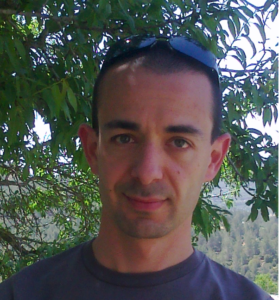 Paul Gross, son of our member Jacqueline, spoke to us directly from Jerusalem on this subject.

Paul Gross made Aliyah at the end of 2007 having worked for two years in public affairs at the Embassy of Israel in London and prior to that completing a Masters in Middle East Politics from SOAS. Today he is a Senior Fellow at the Menachem Begin Heritage Center, with responsibility for developing educational programming and public events in English at the national institute commemorating Israel’s sixth Prime Minister. He lectures to a variety of groups on Israeli history and politics and has written on Israeli and Middle East current affairs for several publications in Israel, the UK, the US and Canada. He has also appeared as a political commentator on two Israeli English-language news channels, i24 and ILTV.

Paul lives in Jerusalem with his wife and three children.  He stays connected to the “old country” primarily by watching English football and getting depressed by the current state of Arsenal.

If you missed the event, please click here to view the recording.

If you wish to get in touch with Paul via email, please contact the office

Jacqueline Gross shares her personal thoughts on the Covid situation in Israel below.  For more see Mosaic’s Israel webpage.  If you’d like to contribute to this series or take part in Israel discussions contact us.

Since we went into lockdown and the months went by, I noticed that I was becoming evermore introspective, just thinking about Covid-19 and what it was doing to my life and to my immediate circle of family and friends here in the UK.  I am sure I am not alone in this.

Yes, I had WhatsApp or FaceTime and Zoom with my son in Israel and family in New York and France .Then I started to consider what it must be like for my son living in Israel which in so many ways is such a different country to live in than the UK . So I decided to inform myself.