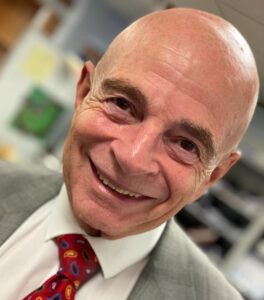 On Tuesday, Alan Solomon was in conversation with Michael Shelton.

Michael is a long-standing member of Mosaic Liberal and has a fascinating CV.   In addition to his career in the legal profession as a Solicitor and Deputy District Judge, he holds or has held  directorships in a stage school, a theatrical agency, a personal management company and a men’s hygiene product company, and he is currently chair of  Rickmansworth Churches Housing Association.

If you missed the event you can view the recording here.

And yes, there is a slight connection with “Strictly” !   He was a director of the world’s largest social dance business for 16 years. END_OF_DOCUMENT_TOKEN_TO_BE_REPLACED 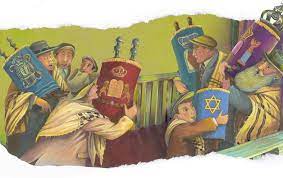 On Sunday we held an online screening of ‘The Tattooed Torah’, followed by a discussion with: Beth Kopin, Marvell Ginsburgs daughter and Excecutive Producer; Brett Kopin, Co-writer; Martin Lemelman, illustrator.

The Tattooed Torah is a true story of the rescue and restoration of a small Torah from Brno, Czechoslovakia, which teaches the Holocaust not only as a period of destruction but also as
an opportunity for redemption.

To view the recording of the discussion before and after the film was screened, please click here.

One of the finest award-winning films made, The Tattooed Torah tells the story of the holocaust in a way that is accessible for children and appropriate for all ages. The run time of the film is 21 minutes. For more information, please visit www.tattooedtorah.com.

On Tuesday, Elizabeth Gowing gave a JACS talk on “The Rubbish Picker’s Wife – making a difference to children’s lives in Kosova”

If you were not able to attend this event, you can view the recording here.

If you would like to support Elizabeth’s charity, donations can be sent via paypal and as it is a registered charity people can get Gift Aid on their donations. This is the link:  http://theideaspartnership.org/wp/?page_id=73 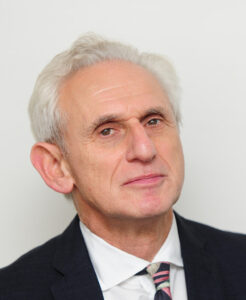 Alex was born in Brighton, obtaining a first degree in Economics and Politics at the University of Southampton. He has always worked as a journalist, initially at the Guardian in the UK and in Washington, USA, in important financial positions overall for a period of 26 years. He then moved to The Mail, becoming City Editor in 2000, a position he holds today.

He was Vice-President at the Board of Deputies 2012-2015, and is currently Chairman of the Abraham Fund Initiatives.

He has provided many articles for The JC and as of late specifically the Jewish News. He received a Doctorate at Bradford University in 2014 for his services to Journalism and has received many prizes for his work. Alex has written 8 books, his latest, The great British Reboot. 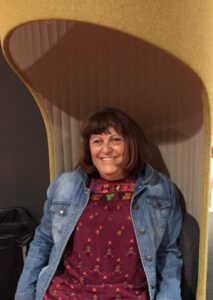 Jennifer is the Founding Director of Exiled Writers Ink, established in 2000 to bring together migrant and refugee writers. Through literary activism, EWI works to promote creative expression and cross-cultural dialogue while highlighting human rights abuses.

If you missed the interview, you can watch the recording here.

A long-time writer of poetry for herself, Jennifer is editor of four anthologies of exiled literature: The Bend in the Road: Refugees Writing (1997), Crossing the Border: Exiled Women’s Writing (2002), The Silver Throat of the Moon: Writing in Exile (2005) and If Salt Has Memory: Contemporary Jewish Exiled Writing (2008). She has also written numerous articles on aspects of the literature of exile as well as presenting papers both in the UK and overseas, ranging from Casablanca to Gothenburg.

Jennifer is a Research Associate at the School of Oriental and African Studies having previously worked in education in inner London. She holds a SOAS PhD, in cultural memory and the literature of exile appertaining to exiled Iranian Jewish women writers, and an MA in Cultural Memory from the School of Advanced Studies, University of London.

Jennifer is herself the daughter of refugees, both the sole survivors of their respective families, who escaped from Nazi Germany and who met in England. 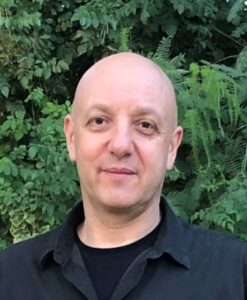 ‘On a Dark Desert Highway’ – Research and Development in the Negev

On Sunday Simon Barak, cousin of our member Gillian Reik, spoke from the Sede Boker campus of Ben-Gurion University of the Negev on the above subject as part of our Israel Events.

Simon is a recognized leader in studying genes that allow plants to survive in the world’s harshest environments such as those found in the Negev desert, and is the author of scores of articles in scientific journals.

If you were not able to join us, you can view the recording here.

Simon made Aliyah in 1990 and married Michal shortly after. Following his initial degrees, he obtained a Ph.D. from Ben-Gurion University (BGU) at the Jacob Blaustein Institutes for Desert Research (BIDR) in 1999 and is currently an Associate Professor at BIDR. In addition, he is involved in promoting Ben-Gurion University via establishing BGU Radio, filmmaking and representing BGU in national and international forums.

JACS – The Jews of Denmark 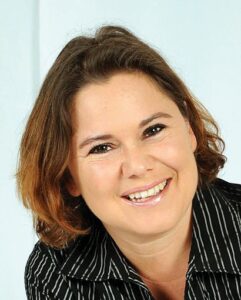 For almost 400 years the Danish royal family has supported and protected the small but influential Jewish community.  On Tuesday, Charlotte Thalmay joined us live from Denmark and told the amazing story of Danish Jewry from when the first Jews were invited by King Christian in 1622 to the present day.

If you were unable to join the meeting, you can view the recording here. 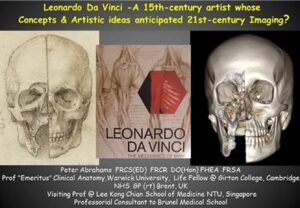 If you missed the presentation, you can view the recording here.

Prof. “Emeritus” of Clinical Anatomy at Warwick Medical School; Life Fellow of Girton College, Cambridge; visiting Prof LKC Medicine, NTU Singapore; and Prof of clinical anatomy at SGU Grenada for over 25 years, Peter has recently retired after 45 years as a NHS GP.  During his very distinguished career, he has set up a new medical school in Brunel University and published over 40 medical text and other books, CDs, DVDs, Apps in over 90 language editions.

Peter graduated from The Middlesex Hospital Medical School and was awarded a British Fulbright Scholarship in Anatomical Education. He has lectured worldwide for 45+ years and worked as an anatomical consultant to the World Health Organisation.

He was consultant to the Buckingham Palace Exhibition “Leonardo- Anatomist “for the London Olympics and in 2013 was 3D anatomical producer for “Mechanics of Man”- Leonardo Da Vinci exhibition in Holyrood Palace for the Edinburgh Festival. Since 2014, Peter has been consultant to Fitzwilliam Museum, Cambridge, on the Rothschild Bronzes by Michelangelo as well as anatomy consultant to the Director of the Uffizi, Florence.

Peter has established a medical education charity to bring Borneo medical students to the UK and  vice versa to help world peace and understanding through Healthcare.

Mosaic Jewish Community Zoom events are available and free for anyone to attend. Our speakers are not paid for their time so If you are able to support Peter’s charity then donate here (please specify the donation should go to the “Abrahams-Goh Medical Elective Scholarship” 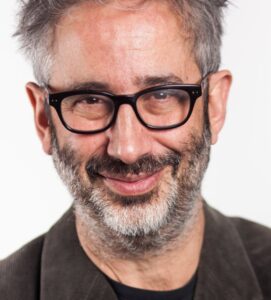 Around 300 people joined our Zoom session to see comedian and writer David Baddiel being interviewed about his new book JEWS DON’T COUNT by Alex Gerlis.

If you were unable to view the event live, you can view the recording here.

JEWS DON’T COUNT is a book for people on the right side of history. People fighting the good fight against homophobia, disablism, transphobia and, particularly, racism. People, possibly, like you.  On the eve of Israeli Independence Day, Jews throughout the world remain an ethnic minority, constantly aware of anti-Semitism.  David is an author, comedian and screenwriter. He has written and performed in highly successful TV comedy shows, including The Mary Whitehouse Experience and Baddiel and Skinner Unplanned. He is the author of four novels as well as six books for children which have sold over 1 million copies.

It is David Baddiel’s contention that one type of racism has been left out of this fight. In his unique combination of reasoning, polemic, personal experience and comedy, Baddiel follows the anti-Semitism he finds in his Twitter feed to the stage, through the media and into politics. He argues that those who think of themselves as on the right side of history have often ignored the history of anti- Semitism. He outlines why and how, in a time of intensely heightened awareness of minorities and the discriminations they face, Jews don’t count as a real minority.  Here is the link to the book 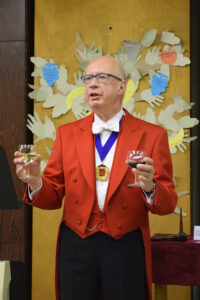 On Tuesday, Judy Silverton will be interviewed Toastmaster, John Ashmele .

John discussed the history and the guilds and the training required for him to become a Toastmaster. We leaned about the different types of functions covered including weddings and b’nei mitzvah, civic and corporate functions and John peppered his answers with ‘tips of the trade’ and amusing anecdotes.

If you were not able to view the event, you can watch the recording here.

Over the years John has derived great satisfaction in organising and delivering many social, community and fund-raising events, ensuring that each occasion is memorable for all the right reasons.

Having pursued a successful career as a freelance Information Systems Consultant for over 30 years, he is now pleased to offer his services as a Toastmaster. Great care should always be taken when selecting a Toastmaster, and John is proud to have been trained to the high standards of the Professional Toastmasters’ Academy and welcomed as a Fellow of the Guild of Professional Toastmasters. Born and educated in London, he currently lives in Eastbury, South-West Hertfordshire with his wife, Annette, a professional translator.