Jeremy Joseph retired as a Consultant Ophthalmologist (eye doctor) in the U.K. recently, having worked for the NHS and privately for many years. In 1993 he started undertaking eye expeditions to perform cataract surgery in developing countries. The places he has visited include Brazil, Myanmar, Byelorus, Namibia, Papua New Guinea, Liberia, Zambia, Zimbabwe, Uganda, Haiti, Ecuador, and Bangladesh. This activity has been temporarily halted by the Covid pandemic but he hopes to resume the expeditions soon.

If you missed Jeremy’s talk, you can view the recording here. 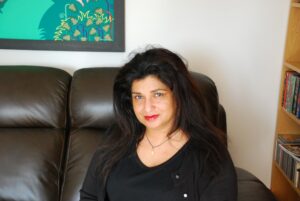 Joyti has had an interesting life with ups and downs. She came from a very conventional North London background and decided to go into the world of office management, where she became a personal assistant for a senior member of the company. She rose to the top and did well. It then went awry and her safe castle at home and in employment fell like a deck of cards.  She was married with a son and her life crashed by spending a number of years in prison. END_OF_DOCUMENT_TOKEN_TO_BE_REPLACED 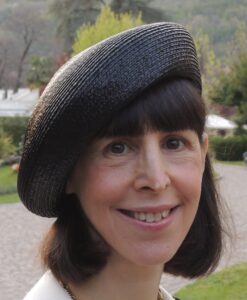 If you missed Sharon’s presentation, you can view the recording here.

Sharon Liberman Mintz is the Senior Consultant for Judaica and Hebraica at Sotheby’s and specializes in the art of Hebrew illuminated manuscripts and rare printed books. For over 25 years she has appraised and cataloged rare books for Judaica auctions worldwide and has participated in the sales of several outstanding collections of Judaica and Hebraica.  In addition, Ms. Mintz serves as the Curator of Jewish Art at the Library of The Jewish Theological Seminary, New York where she has curated more than 45 exhibitions and co-authored eleven exhibition catalogues focussed on the rare book treasures of the Library.

The Board of Deputies’ Hidden Treasures’ celebrates the archives in Britain that tell the story of Jews in Britain. Over 50 archives, throughout the country, are part of the Hidden Treasures network. They hold material – photographs, documents, audio and video recordings – about Jews in this country, dating from the eleventh century to 2021.

Board of Deputies Archives and Heritage Manager, Dawn Waterman told us more about the project and shared some of her favourite images from the archives.

If you missed the meeting you can view the recording here.

So you think you keep things that reflect your past? 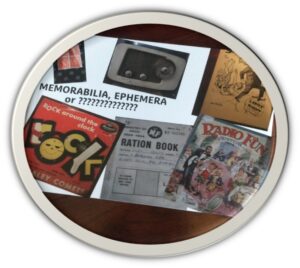 On Sunday, Ralph Kley revealed his years of collecting – you name it, he has found a place for it in his home.

He recently attended the Morris Collins talks on Eccentric Collections and thought – “hang on a minute I’ve got loads of stuff and promptly went off to produce a book through the decades of ephemera, memorabilia and more.

Memorabilia, Ephemera???  Many (including his long-suffering wife) would call it rubbish…let us know what you think.

Joan Noble helped Ralph reveal his many varied interests and took us on a trip down memory lane.

If you missed the presentation, you can view the recording here. 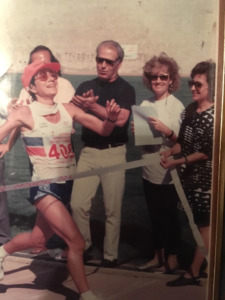 On Tuesday, Danielle Sanderson was by Steve Levinson.

Danielle read Physics at Oxford University and joined Sema Group, a multinational software company where she worked on operational research and mathematical modelling. She moved to the Training Department, where she introduced goal setting and action planning on all training courses and decided she should practice what she was preaching. In addition to various work-related goals, she set herself the goals of participating in the Krypton Factor on ITV and running the London Marathon.

She discovered an aptitude for running and went on to represent England and Great Britain 21 times including winning the Crete Marathon on her GB debut (see photo!) winning a European bronze medal, finishing 6th in the Commonwealth Games, winning the London to Brighton ultra-marathon and setting a world record for Women’s Masters at 50km. Danielle continued applying the techniques of Action Planning and started her PhD at the age of 50. She graduated three years later and obtained a lectureship at the Bartlett School of Planning, UCL. Danielle has been married to Steven for 35 years, and they have three children, Joseph, Miriam, and Hannah.

Adam’s talk is about two of his greatest passions – art and biblical criticism – concentrating on the role of fine art (including sculpture), literature and cinema upon our perceptions of Bible texts and personalities.

If you missed the talk you can view the recording here.

END_OF_DOCUMENT_TOKEN_TO_BE_REPLACED

Jackie Briggs  is the proud parent of two children who are lesbian and gay.  Both are now in their 30’s but about 20 years ago she began working as a volunteer for Families Together London which supports parents who are going through difficult times when they discover their child/ren comes out as LGBT.  She hopes that her talk, which covers many aspects of being such a parent, is informative, enlightening and uplifting.

If you missed this event, you can view the recording here. 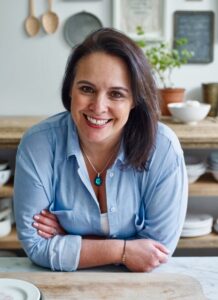 If you missed the event, you can view the recording here.

Anne Shooter had been a journalist at the Daily Mail for almost 20 years when she decided to follow her passion for cooking and train to be a chef at Leith’s School of Food and Wine at the age of 40. Since then she has had two cookery books published, Sesame & Spice – a book of Jewish baking – and Cherish, a collection of Jewish recipes from family, friends and communities all over the world.

Her recipes span from traditional Jewish food, often with its roots in Eastern Europe, to more modern creations, using spices and ingredients more in line with those used in Israel and other parts of the Middle East. All of her dishes are quick, simple and foolproof: As a working wife and mum she has no interest in food that needs hard-to-find ingredients or takes too long to prepare!

While cooking remains a huge passion and a third book is in the offing, Anne is a senior executive in the Mail and Metro newspaper group advertising team. She lives in north London with her husband Daniel, a solicitor, two teenage daughters, Charlotte and Jessica and large labradoodle, Rufus. 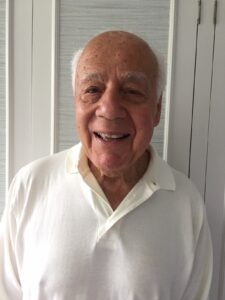 Back by popular demand, Michael Bennett, Boris’s son, continued his entertaining tales of the life and times of his late father.