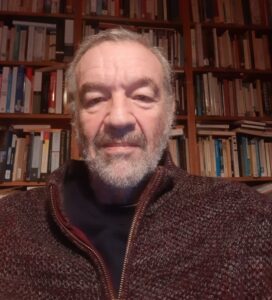 Join us at 4pm for an interview with Brian Gilbert.

Born in London in 1949, Brian spent his formative childhood years in Sydney, Australia. He was a child actor, appearing several times on Australian television. In 1969 he won an Open Scholarship to read English Literature at Oxford University, directing several plays while he was there, and then travelled, as an actor, to the United States with a semi-professional drama company.

Returning to England, Brian appeared in repertory theatre and in the films, VOYAGE OF THE DAMNED and THE EXPLORERS, prior to spending three years at the UK’s National Film and Television School (NFTS), where his graduation film, THE DEVOTEE, won several prizes and much acclaim, particularly from David Puttnam – who commissioned Brian to write and direct his first feature film, SHARMA AND BEYOND, for Channel Four’s First Love series.

This led to many films directing a “Who’s Who” of stars, including Stephen Fry, Jude Law, Vanessa Redgrave, Simon Russell Beale, Robert Hardy, Mel Smith and Michael Fassbender to name a few; and many film awards.

Since 2004, Brian has taught directing for the MA course at the NFTS; and since 2010, also the Directors Series there. In 2018, Brian became Co-Head of Directing Fiction at the NFTS and started a new course, ‘Directing the Actor’.