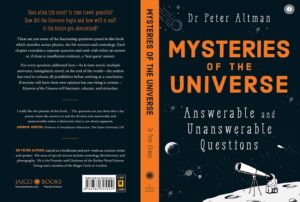 Steve Levinson will interview Peter Altman at 2.30 pm.  Peter qualified as a biochemist in the 1960s and spent 20 years in medical research, gaining a PhD and a DSc.  After being made redundant in the 1980s, he went into medical book publishing, setting up his own medical publishing company which Peter ran for some 10 years.

He is also a Member of the Magic Circle and, rather impressively, and without the use of magic, Peter has held not one but two Guinness World Records (for the fastest journeys round the London Underground [1979]; and the Moscow Metro [1989]).

Peter started work on Mysteries at least 15 years ago, and came up with the approach of framing each of the 14 chapters as a question; Does Alien Life Exist? Is Time Travel Possible? How Did the Universe Begin? Does Payer Work? etc., and provides a personal ‘Best Guess’ answer to each unknown.

At the end, he has included his first attempt at science fiction.  This is a 3-part short story and, so as not to spoil the ending, Peter has hidden the last sentence in the Index.  It’s his thank you to those who buy the book……