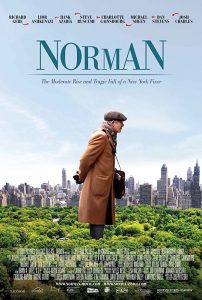 8.00 pm. Norman Oppenheimer (Richard Gere) is the President of New York based Oppenheimer Strategies. His word-of-mouth consulting business concerns itself largely in American-Israeli business. In short Norman is a “fixer” and a shyster. Norman befriends a young politician at a low point in his life, and performs a Mitzvah. Three years later, when the politician becomes an influential world leader, Norman’s life dramatically changes for better and worse. Starring Richard Gere in perhaps his strongest performance to date, he is ably supported by a cast of notables including, Michael Sheen (Frost v Nixon) and Steve Buscemi (Broadwalk Empire). A very different kind of movie, that is well worth seeing. Come Along!  (Subtitles available)

Donations for our chosen charity would be appreciated if you care to give.