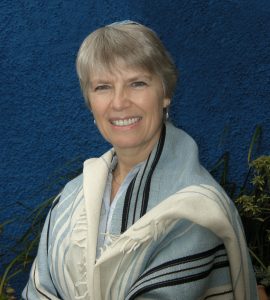 Rabbi Rachel Benjamin lived in Los Angeles from 1984 to 1994, where she gained an MA in Jewish Studies at Hebrew Union College.  She was ordained in 1998, at Leo Baeck College, and has served as Rabbi at Northwood & Pinner Liberal Synagogue, the Progressive Jewish Community of East Anglia, South Bucks Jewish Community and the Liberal Jewish Synagogue.  Rabbi Rachel supported Mosaic Liberal Synagogue in a pastoral role in the first few months of the Covid-19 pandemic and, as of July 1st 2020, serves as our Rabbi.

From 2005-2008 Rabbi Rachel served as Joint Chair of Liberal Judaism’s Rabbinic Conference and she is committed to interfaith dialogue.  She has taught at Leo Baeck College, and at Heythrop College, University of London.

Jewish Music is one of Rabbi Rachel’s passions, and she plays the guitar. She created a singing group at NPLS which, among other engagements, sang at the ‘Jewish Cultural Day’ at the Millennium Dome in 2000. She led the Creative Music Workshop for the Liberal Judaism Day of Singing in 2003 and is an active participant in LJ music events.

Rabbi Rachel contributed an article ‘A Jewish Reflection on Relations with Christians and Christianity’, in Beyond the Dysfunctional Family: Jews Christians and Muslims in Dialogue with Each Other and with Britain, The Manor House Abrahamic Dialogue Group in 2012. She contributed to Women Rabbis in the Pulpit, A Collection of Sermons and Responding to the Call: A Life of Liberal Jewish Commitment, a Festschrift in honour of Rabbi Harry Jacobi’s 90th birthday.

Rabbi Rachel is a keen tennis player, and has represented Great Britain in both European and International Maccabi Games.  She is married to Harry Davies, and has three step-children, and six step-grandchildren.