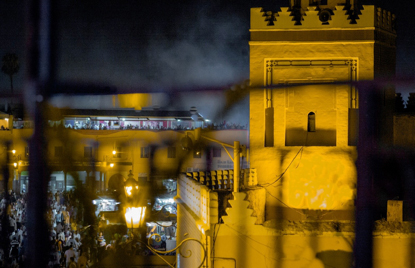 This journey to North Africa  offers a unique opportunity for a small group of people to explore sites of significant Jewish history and Berber culture. Marrakech is relatively close to  London yet culturally and geographically utterly different. Many Jews migrated to Morocco after the destruction of the second temple and also when expelled from Spain during the inquisition. There have been long periods of peace and tolerance and Sultan Mohammed V refused to implement Nazi demands for persecution. Today, the Jewish population of Marrakech is very small and primarily elderly with large numbers having emigrated to France or Israel.

Thursday, 15th April:  Mid-afternoon departure on BA flight 2666 leaving Heathrow T5 at 2.45PM and arriving in Marrakech at 6.25PM. After arriving at our lodgings, the Riad Dar Nimbus, we’ll have dinner and relax.

Friday, 16th April: After breakfast, we’ll go to the Mellah, once the Jewish  quarter, to visit the Lazama Synagogue which is built on the site of a structure dating to 1492. We’ll also visit the nearby Jewish cemetery, spice markets, Place Des Ferblantiers, Bahia Palace and the exquisite Saadian Tombs. After returning to our Riad for a brief rest, we’ll celebrate Erev Shabbat and go out for dinner.

Saturday, 17th April:   Free time to visit Marrakech’s sprawling and maze-like souks.  If you can cope with strong smells, a visit to the tanneries and leather goods shops is worthwhile.   Otherwise, shops abound for sweets, herbs, spices, carpets, baskets, jewelry, perfume, clothing, metalwork plus fruit and vegetables. Near the Jemaa El Fnaa Square, there are numerous outdoor restaurants and, off of a side street, superb ice cream sundaes are to be found in an old fashioned French-style cafe.  We’ll meet up for dinner.  (If you desire a massage or other spa treatment, this can be booked at our Riad.)

Sunday, 18th April: After breakfast, we’ll travel by mini-bus  for about an hour to the foothills of the High Atlas Mountains and visit the Écomusée Berbère , located in the village of Tafza and overlooking the Ourika Valley.   After taking tea at the museum, we’ll visit a nearby Jewish cemetery and the pilgrimage site where the saintly Rabbi Salomon Bel Hensh was buried five centuries ago. We’ll travel a bit further along the Ourika River and have lunch before heading back to Marrakech.

Monday, 20th April:  After breakfast, we will go for a long visit to the extraordinary Majorelle Gardens  where we will take refuge among the exotic plants, Moorish architecture painted in brilliant colours.  There is a small but outstanding Berber Museum  devoted to the diverse influences on Moroccan culture, including Jewish contributions.  We will have lunch at the excellent Café Bousafsaf on site.  Plenty of opportunity for photography or sketching and painting. At 4.30PM, we’ll head to the airport to catch British Airways flight 2667, departing at 7.10PM and arriving back at Heathrow at10.