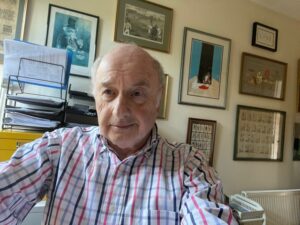 On 14th May 1948 Ben Gurion declared at Independence Hall in Tel Aviv the foundation of the New Jewish State.

Who would have imagined that, close to the 73rd Anniversary of the founding of the State, the most tragic incident internally in the State’s history would take place with 45 crushed to death at an event to celebrate Lag b’Omer on Mount Meron on the 33rd day of the Omer where 100,000 attended?  Or could this disaster have been avoided?

At the declaration Ben Gurion declared Israel will be a State for the Jewish People and that this would be an equal State for all its citizens including the Haredi. A Status Quo agreement was reached with the Haredi Community. They would not oppose the creation of the Jewish (Zionist) State and they would be allowed to operate their own brand of Judaism as a state within the State. This worked reasonably well as long as The Labour party (Secular entities) was in power.  However, in 1977 The Likud party came into power and from that time almost till now the Religious Parties (including the Haredi) were themselves in as part of the power base determining the role they could play in the Israeli State.

The site at Mount Meron, one of the Holiest to the Haredi in the State of Israel, has been considered for over 10 years a potential death trap at Lag b’Omer.

On April 10th two ministers from the ruling right-wing parties, Aryeh Deri, the interior Minister and Amir Ohana, the public security minister, decided there should be no limit to the size of the gathering. The Prime Minister, Benjamin Netanyahu, would not override them, despite official gatherings not being allowed anywhere to go over 10,000. The gathering at Mount Meron was the first major event at which the Haredi could gather after many months in Lockdown and so, if left to their own devices, the numbers there were always certain to be totally unsafe. A supposed judicial enquiry will only come out with solutions and responsibility for this situation if it is independent from the ruling Likud Party.

Let us hope that this week Yair Lapid of the party Yesh Atid is requested by President Rivlin does form a Government, which will ensure the Haredi stay away from Government and enable Progressive Israelis to move forward. The first step has been the election of Rabbi Gilad Kariv, the first Progressive Rabbi Elected to the Knesset.

However, back in the UK, we look forward to several events this week at Mosaic.

The Mosaic Liberal AGM is being held on Zoom at 11.00 am on Sunday 9th May. This will be followed at 4.00 pm by a showing of the award-winning film, ‘The Tattooed Torah’, a wonderful story of the restoration of a small Torah from Brno, Czechoslovakia.  As if viewing the film were not sufficient, we will then have the opportunity of hearing from the team that produced the film.  Then on Tuesday 11th May  at 2.30 pm we will meet the Dancing Judge, Michael Shelton, a member of Mosaic Liberal and, by all accounts, a man of many talents.  Finally, on Tuesday 4th May we heard an inspiring story of the work started by one individual  who happened to find herself living in Kosovo and made it her mission to get young children into school – just by providing them with a pair of shoes!  This recording will only be on our website for one week (at the speaker’s request) so you’re urged not to miss it!