Rabbi Middleton writes:  The history of the Czech Scrolls is remarkable. The Czech Memorial Trust describes it as follows: The legend that there was a Nazi plan to create a ‘museum to an extinct race’ in Prague has never been proved. The saving of the Jewish treasures of Bohemia and Moravia should be credited instead to a devoted group of Jews from Prague’s Jewish Community and to what had become the Central Jewish Museum in Prague.

They devised a plan to bring the religious treasures from the by then destroyed provincial communities to the comparative safety of Prague and managed to persuade the Nazis to accept it. More than 100,000 items were sent to the Museum, among them about 1,800 Torah Scrolls. Each was meticulously recorded on a card index by the Museum’s staff with a description of the Scroll and the place from which it came, hoping that one day they might be returned to their original homes. 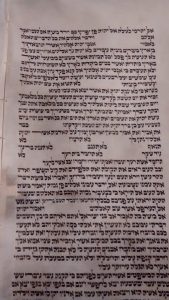 All the Museum’s curators were eventually transported to Terezin and later Auschwitz; only two survived. At the end of the war Czech Jewry was decimated, fewer than 10,000 Czech survived and some 50 congregations were re-established, but the Communist coup in 1948 stopped the revival of Jewish life in its tracks. Most congregations closed and their religious treasures were once more returned to what by 1950 had become the State Jewish Museum in Prague.

In 1964 Westminster Synagogue managed to purchase the 1,564 Czech Memorial Scrolls from the Czechoslovak Communist State, and became their new custodian. Most Scrolls arrived at Westminster Synagogue with a number label attached, which referred to the original German Card Index that had been prepared by the Jewish curators at Prague’s Central Jewish Museum. Unfortunately 216 of the Scrolls that came to Westminster Synagogue cannot be traced to any particular community, either because the number label for that Scroll became detached or because the information available is insufficient to relate them to a particular place. They became known as the ‘orphan Scrolls’. 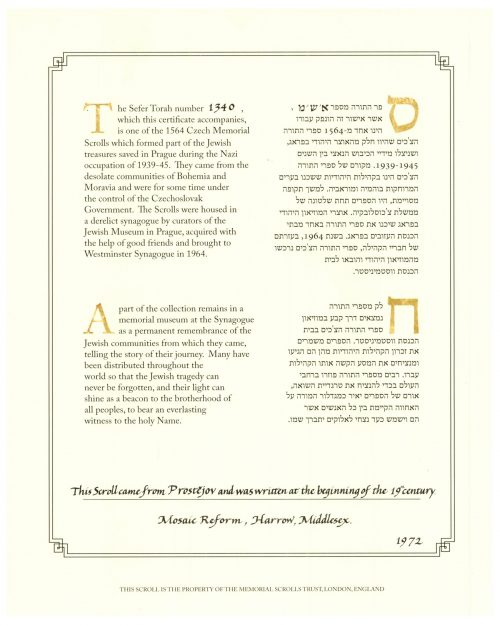 The original catalogue number, 1340,  which is still visible on the wood of the left Eitz Chayyim (pole), links Mosaic Reform’s Scroll to Prostejov, a rather picturesque town in Moravia’s Hana region near the town of Olomouc (about 30 miles north-east of Brno, the capital of Moravia), on a key trade route connecting Europe’s south with Europe’s north, which made it an important centre of culture, trade, and industry.

The history of the Prostejov Jews traces back to 1454 when the Jews were expelled from Olomouc (as all Jews were expelled from the royal towns at the time), many of whom settled in Prostejov, around the church. Because of its trading connections it soon became one of the biggest Jewish communities in the Olomouc region, which earned it the name of the ‘Jerusalem of Hana’. According to a 1930 census, there were 1,400 Jewish residents in Prostejov before the war. That number had risen to an estimated 1,650 in 1942, when the Nazis put the Jewish community on transport to Terezin. Only 84 survivors returned, 10 of whom were children. Little remains of the old Jewish quarter, besides the two synagogue buildings, one of which now belongs to the Czechoslovak Hussite Church and the other to an Orthodox Church.

Searching the website of ‘Centropa’ (which is the internet name for Central Europe Centre for Research and Documentation), a Vienna and Budapest-based non-profit NGO that uses advanced technologies to preserve Jewish memory in Central and Eastern Europe, the former Soviet Union, the Balkans and the Baltics, brought me to Maud Michal Beer, one of the 1,250 elderly Jews whom Centropa interviewed to “paint a picture of the world they grew up in – as well as the world they rebuilt for their families after the war”.

Maud Michal Beer, who was born as Maud Stecklmacherova in Prostejov in 1929, now lives in Israel. She submitted more pages of testimony than anyone else, documenting the lives of 450 friends and relatives, including her father and almost all the Jews in her hometown of Prostejov, in the Czech Republic. She said about her testimony: “I feel as if a great weight has lifted from my heart. No one would have remembered them, if I hadn’t done this, who would have? Soon, I will no longer be around. We really are the last ones.”

Her testimony brings the Jewish community of Prosterjov back to life, for there are no longer any Jews left in Prostejov. As Michael Hepner, the Research Director of the Memorial Scrolls Trust, rightly wrote poignantly in a letter to me: “The Jews of Prostejov are depending on the Jews of your congregation to remember them as a people, and to save them from being lost in the anonymity of the Six Million. Also the future of their history heritage is in your hands, for there are no other Jews who could be interested in this tiny corner of Jewish history and this fragment of centuries of Jewish life.”

Maud Michael Beer helped to bring that ‘fragment of Jewish history’ to life. Reading her testimony gave our Scroll a voice; the voice of a community which is no longer but wants to be remembered.

The Memorial Scrolls Trust, a U.K. non-profit organization, has recently begun to reach out to synagogues and other instititutions who received the Czech scrolls to gather updated information about them. They plan to continue to enhance their website so it becomes “a repository of all knowledge concerning the 1564 scrolls, the Jewish history of the towns they came from, the Jews of those towns, their fate, survivors stories, photos etc. Also where the scrolls are now, how they are used  and honoured etc.” More information about the Memorial Scrolls Trust is available on their website.