We had hoped to have all forthcoming Mosaic Reform High Holyday Services in our new building, but unfortunately have to announce a slight delay.

The fabric of the building is complete and we are delighted to say our new home is looking terrific, inside and out, as you can see from the photos below.

Unfortunately, however, the perimeter security fences are not in place yet. While these have now just been approved by the CST and the Police, so the railings and gates can be built and fitted as soon as possible, regrettably it is not possible for this work to be completed in time for Rosh HaShanah.

By the time we get to Rosh HaShanah, we will have confirmation of the security fencing delivery timetable and will either confirm arrangements for Yom Kippur in Stanmore or advise you of alternative arrangements if necessary. 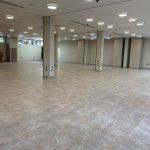 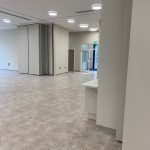 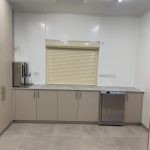 It has been six weeks since I last talked my way on to the site at Stanmore Hill to see how things look at our “under construction” new home.

Greeted at the entrance by the site manager, who insisted I needed a hard hat and high visibility jacket, the first impression on this second visit was that there were an extraordinarily large number of builders swarming over the place.  A heavy earth mover was levelling the car park surface, joiners were building wooden external storage doors, while another was sweeping paving sand into the block paving in front of the main entrance. Others were busy around the impressively solid, shoulder high brick planters which surround the building and provide extra security. Lorries and vans were arriving regularly, manoeuvring and offloading more materials and equipment.

It was certainly a hive of activity which, to the untrained eye, implied that these builders should be finished on site in a matter of weeks. Hopes that August will see the first services in the building seem not unreasonable.

That rather depends on the interior, which was also being worked on by numerous craftsmen. One impressive change was immediately apparent on walking in. On the left of the lobby is a stone wall, replicating the look and feel of the Western Wall in Jerusalem, although not quite as big. (It does actually face west towards Hatch End and Pinner if my geography is correct). Inside the main hall the tiled flooring is in place, currently under a protective covering, and the overall colour scheme is light, which is enhanced by the numerous windows and skylights.

The biggest change since my last visit is the installation of the huge floor to ceiling partition walls, and the tracking which is the key to giving the main area its flexibility to switch between various rooms and halls. The partitions are very heavy but seeing how smoothly workers were gliding them around, they look to be a hugely practical feature. Many of them include attractive light oak doors. In one section a whole room has been constructed with partitions which, I was told, can be used for services of around 50 people, or for various meetings, and will also house the library.

On the left of the hall is a large serving hatch through to a spacious, rectangular kitchen, currently awaiting appliances and sinks. Also awaiting fittings are the nine toilets, each of which will be a fully enclosed room, with its own wash basin, and mirror. There are also disabled facilities, and a shower room. The main office is a very light and airy room near the front door and with views down Stanmore hill.

Given the number of workers on site there is clearly a lot of finishing up to be done before the handover. On the floors above, I was told that six of the nine flats have been sold by the developers so that part of the project is also nearing completion.

All in all there is much progress to report, but there is still a little way to go before we can finally get to enjoy all the work that has been put in. A few prayers placed into our own western wall might help.

The photos below show the Jerusalem stone wall, the floor, the outside image, brick planters/barriers, the partitions now in place. 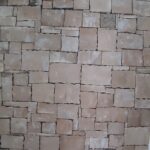 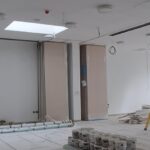 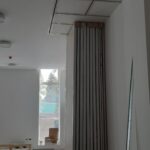 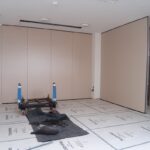 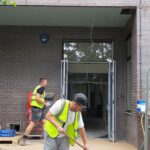 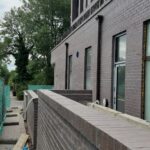 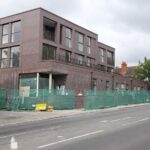 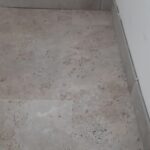 See below for photographs which were taken on-site yesterday. There are two of the administration office and it’s current state of delivery which is nearing completion. The other one is of the hall where the floor is now down and protected, light fittings in place and the final electrics to be installed. 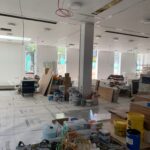 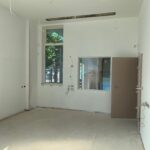 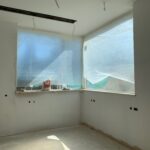 Spring is well and truly here, so flashing my press card I requested a sneak preview of what is going on at the building site on Stanmore Hill where Mosaic’s new home is being constructed.

It seems that the handover date is now late June. It would be nice to think that religious projects somehow have a divine advantage over mere secular ones, but there has been no intervention from on high to help deal with the supply issues, and shortages of manpower and materials that are commonplace throughout industry.

Nevertheless, as the attached photos show, the project is moving forward. Outside most of the scaffolding has been removed so the overall look of the building is now much clearer.

Donning my hard hat and high-viz jacket I negotiated my way through what will be the car park, which can take 10 Mosaic cars plus another  9 for the flats above. Once through the front door, there is a good sized general office on the right, and then an entrance hallway which opens out into a vast, open-plan interior space. It is surprisingly large, and the extra 15 -20% of floor space compared to Bessborough Road is immediately apparent. It still contains piles of builders’ materials, but even so the dimensions are impressive. The tracking on the ceilings is now in place, so this area can be divided by partitions into spaces for different services, or classrooms, while also providing for a central Kiddush area or social hub.

One area, stretching across the whole width of the space, can be configured for meetings or performances accommodating large audiences, with a drop down screen. There’s also a rectangular kitchen off to one side with open serving access to the central hub. Also off the entrance hall are partly constructed toilets, a disabled toilet and shower room.

Apart from the size, the other noticeable features are the high ceilings and sky lights which make it very airy.

To my untrained eye it still looks quite unfinished which, of course, it is. You need a pretty good imagination to visualise how this will all look when the builders clear their materials, the dangling wiring and networking is connected, the walls are fully plastered and painted, and the partitions are in place. But those involved in the project are growing in confidence that the handover is now only five or six weeks away.

Only then can the necessary internal touches and furnishings be installed. So summer will hopefully see the first services taking place, and other activities coming on stream. By the High Holydays Mosaic’s new home should be fully operational. 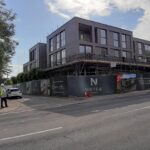 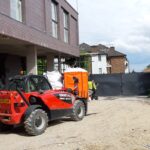 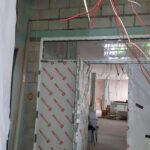 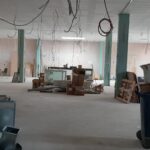 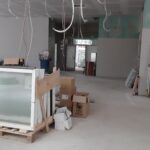 View back to main door 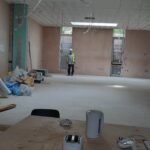 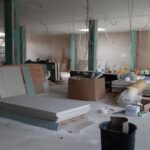 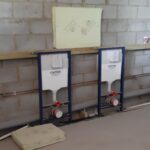 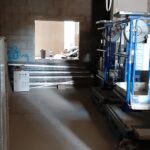 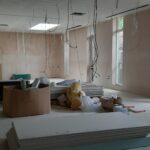 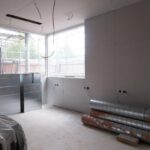 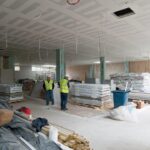 THE ROOF IS ON, WINDOWS GOING IN – BUILDING MAKING PROGRESS DESPITE COVID DELAY

The work on building our new home is progressing although the weather, Covid and construction supply issues are proving challenging for our development, just as they are for the whole industry.

Nevertheless a number of milestones are being passed in the process. The building has reached its full height and the roof has been completed meaning it is now watertight. By the time you read this article we will have the windows in place and scaffolding is shortly to be removed.

With the external elements nearing completion, the developer will increasingly concentrate on internal areas, which will allow the space inside to come together and take shape.

The issues mentioned above have added a few weeks to the project. Although dates are not fixed, the practical completion of the whole development and handover of the synagogue is still expected in the late Spring.

Then there will be an intensive 8-week fit-out programme to make the building fully functional. A number of volunteer teams have been hard at work for a while now in designing, identifying and sourcing the numerous items needed to turn the building into a home for the whole Mosaic Jewish community. One of the most important features to go in will be the partitions which will allow the space to be adapted into numerous configurations.

Once the major elements of the fit-out are completed it is hoped that test events for limited groups of people can take place, before a full opening.

The hoardings surrounding the development have already demonstrated to local residents and passers-by what the final look of Mosaic and the flats above will be. 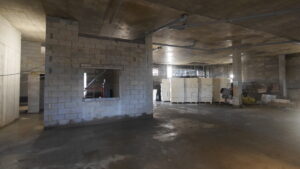