Mosaic has two film and theatre groups that each meet monthly:

Mosaic Film meets monthly and offers film-lovers an opportunity to share this interest. A variety of films are shown, mostly of Jewish or Israeli interest, with some foreign-language films with English subtitles. Presentations have ranged from comedy to drama to documentary, and have included the following titles over the last 12 months:

Keeping up with the Steins, The Debt, Max, The Counterfeiters, The Infidel, Sarah’s Key, Imaginary Witness, Crossfire, Leon the Pig Farmer, Life is Beautiful, A Serious Man and The Lemon Tree.

The screenings start at 8pm at Bessborough Road, usually on the third Tuesday of the month, and are followed by a short discussion. Light refreshments are provided; a donation to a synagogue charity is appreciated. 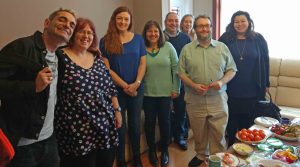 For more details of the next Mosaic Film events, see the calendar, and for further information about Mosaic Film or to join our Mosaic cinema Facebook group, contact us