Our ethos for involvement in the wider world

Mosaic is a diverse, pluralist Jewish Community that seeks to enhance and sustain Jewish life .

We aim to foster good relationships with the wider community, locally, nationally and internationally and with Jewish and non Jewish organisations and charities. We want to make our community aware of the those around us, be outward facing and engage with the wider world  – and not shy away from controversy. We are about diversity and choice. Within Mosaic we celebrate and respect the differences between different strands of Judaism without imposing behaviours on each other.

Mosaic is committed to raising awareness of the needs of others and raises funds for a wide range of causes, both Jewish and non Jewish, domestic and in Israel and the Middle East. Our social events are often charity led and directed to the charitable activities of the whole community and community awareness. We want to create an inclusive, egalitarian community, valuing difference to enable the growth of Judaism, inspiring individuals and communities with Jewish values and traditions and ethical and humanitarian values.

You can find out more about our activities and projects beyond Mosaic below, and in the links to the right of this page (also in the tab above).  Our recent activities also include: 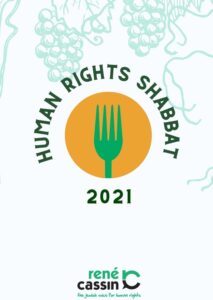 René Cassin have put together a resource pack on the subject of The Right to Food – you can download the document by clicking the link below.

You might also want to join us on Sunday 12th December at 4pm for a talk by Rachel Vogler: The Human Right To Food – A Jewish Responsibility

If you have not already donated funds towards the Afghan Refugee crisis, and would like to know where to donate, can we suggest either JCORE (the Jewish Council for Racial Equality) https://www.jcore.org.uk/ or  World Jewish Relief, https://www.worldjewishrelief.org/.

Also, the Board of Deputies has a page of information about how we can help:  https://www.bod.org.uk/bod-news/how-we-can-help-refugees-from-afghanistan/

Goods For Good is a small charity in Watford, which has both UK companies and the community donating essential goods for vulnerable communities in the UK and overseas.  ...

Chanukah candle lighting with ambassadors of Israel, UAE and Bahrain 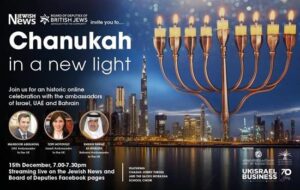 To celebrate this historic event, the Board of Deputies is organising an online Chanukah candle lighting ceremony with the Israeli Ambassador, together with the Ambassadors of Bahrain and the United Arab Emirates on 15 December at 7pm, you can join the event on the BoD facebook page.

Mosaic members in the news

In other news, Mosaic’s tablet initiative was also featured in last week’s Jewish Chronicle (albeit as ever with a number of errors!) 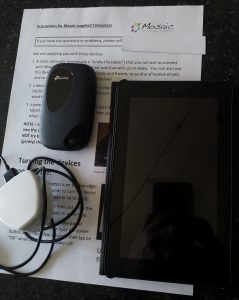 We are aware that the current situation is difficult – especially for people who cannot use “tech” to connect with others using video calling, or for practical things like online grocery shopping.

The Mosaic tech team has responded to this with “tablets for the tech phobic” – reconfiguring Kindle Fire tablets to provide Zoom calling, email and voice based internet browsing (Alexa).

Some of our wisest (and oldest) members have got online for the first ... 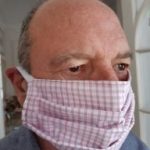 Jeanette Leibling is making facemasks which are very easy to wash and comfortable to wear, and would like to help protect all members of Mosaic either by providing ready–made facemasks, or by helping you to make your own.  Please contact her and she will be delighted to help everyone to keep safe

We are aware that the current situation is difficult – especially for people who cannot use “tech” to connect with others using video calling.

The Mosaic tech team has responded to this with “tablets for the tech phobic” – reconfiguring old Kindle Fire tablets to provide Zoom calling, email and voice based internet browsing (Alexa).

Can you help with this initiative? We are asking for 3 things:

If you know of anyone who this would help please ...

On 11th June Ealing became the last of the London’s 32 councils to finally adopt the International Holocaust Remembrance Alliance’s definition of anti-Semitism.
Quite why Ealing took so long is unclear: the Council is run by a predominantly moderate Labour administration which seemed set to adopt the definition last year. Some opposition emerged, hence the delay.
The Board of Deputies and the Jewish Leadership Council were active in lobbying the council and at the end of March representatives of a number of ...

The day after the tragic events in Pittsburgh, the JMI Big Band were rehearsing for their upcoming Chanukah season concert.

Motivated by the band members desire to provide a defiant response of love, anger, catharsis and energy in the face of hate, the band came together to record music, fuelled by the message; We are stronger together, we are stronger than hate.  The video and recording feature Mosaic member Sam on tenor sax

The music is based on the yiddush ... 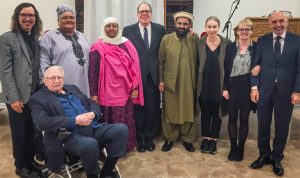 In his sermon, Rabbi Frank spoke about how, as a result of our anxieties and fears concerning the state of the world today, many people turn to a mythical past for inspiration instead of seeking to help others who are vulnerable in the present and having hope for the future. A fantasised ‘Retrotopia’ (the concept described by sociologist Zygmunt ...

This event will take place on Sunday 27th May from 7.00 – 10.30 pm at Wembley Youth Centre, London Road, HA9 7EU.  If you’d like to attend, please tell Rabbi Frank who will arrange for your name to be on the list at the door.

We are growing our relationship with Sufra-NW London, a community food bank and kitchen, based in Stonebridge Park in the London Borough of Brent, which aims to support disadvantaged families suffering food poverty.   Some of Sufra’s guests are asylum seekers, some suffer from poverty despite working long hours and others are plagued by either or both physical and emotional difficulties.  Sufra’s multi-faith staff and volunteers offer guests a safe haven; meals, food parcels, practical advice and referrals and emotional support.  There are fully ...

The Environmental Peacebuilding May Newsletter has been published. You can view the Newsletter here

Mosaic members joined with other faiths to prepare for Pesach, Easter and Ramadan, hearing from faith leaders of the three faiths (Aisha Khan, Frank Dabba Smith and Leão Neto), the Jordanian and Israeli directors of EcoPeace, and the Mayor of Brent.

On 5th April, Rabbi Frank together with the Directors of EcoPeace-Middle East met with Lord John Alderdice ...

Solidarity with faith Communities and the Metropolitan Police

One day after the tragic and violent incident in Westminster, faith leaders and the Borough of Brent Police Commander met at the Wembley Central Mosque to express solidarity and mutual support.  Their reassuring message of unity and resilience was received warmly by the worshippers at the Mosque and the Metropolitan Police representatives.

Drought and poor rains have decimated harvests leaving millions of children malnourished and in need of urgent food and medical support.

There is no doubt that much of the starvation has also been caused by human beings. Bombs and bullets, terrorism and war have destroyed infrastructure and forced ...

Focus on the plight of Jungle refugees on Mitzvah Day

Mosaic  Reform member Karen Pollak spoke about the plight of refugees at the Jungle in Calais after volunteering, with her daughter Mia,before it officially closed.

They were based at the Refugee Community kitchen on an industrial estate. As well as cooking for thousands of refugees – ” I don’t think I’ve peeled as much garlic in my life” – she also chopped wood, used as fuel to cook with. She spoke about their ordeal  to the Mosaic Community ...

In the run up to Mitzvah day and as part of interfaith week, Mosaic members joined with local muslims, and Hindus from Neasden temple to prepare over a hundred meals at the Sufra food bank in Stonebridge Park on Thursday.