Mitzvah Day has become an international event with communities in Israel, American, Poland, Argentina, Zimbabwe and Germany. Mosaic takes part in Mitzvah day each year. One group wrapped 50 boxes and filled them with toys and gifts which were taken to the Barnardo Freeman Family Centre in Harlesden where they were distributed to families using the Centre for their Christmas party. Another group of adults and children wrapped up warmly and went to Stanmore Common. Under the direction of Stephen Bolsover from Harrow Nature Conservation they harvested heather and then sowed it in areas where new heather was needed. The third group of children and adults went to The Haven Residential Home where they entertained the residents.

Joanna Phillips from Mosaic Reform had a gap year in Israel and trained as a volunteer paramedic with Magen David Adom (Israel’s ambulance service).  To find out more of what she did read her blog “ 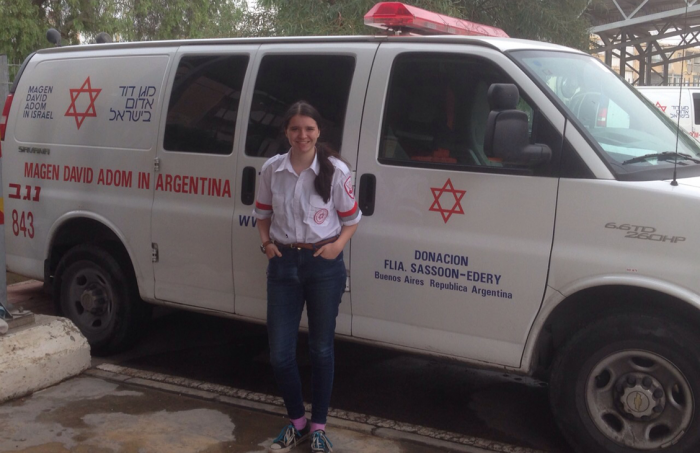 Joanna writes: When I signed up to volunteer on an ambulance in Israel for two months, I wasn’t really sure what to expect. Now, on my penultimate day of volunteering, I can say that I’ve had a life-altering experience which has taught me skills I will keep forever and placed me in situations I never thought I’d be in.

For some background: I’m currently living in Israel for nine months on a gap year with BBYO Beyond. For the first four months of my programme I was volunteering in Jaffa and studying at Tel Aviv University. It was there that I learnt to speak Hebrew in Ulpan classes, and my language skills have been highly praised by all of the people on my ambulance. “Your Hebrew has definitely improved,” an Israeli young volunteer told me, “because you were awful when you got here.” My accent has also been commented on in terms as highly as “broken”, “funny” and “= English”. Luckily, the majority of my patients only speak Russian, so this is not too much of an issue. After Tel Aviv, I was given the opportunity to work with Magen David Adom, Israel’s national ambulance service, for two months. I readily agreed to this and I am so glad I did. The programme started with an intensive sixty hour training course in Jerusalem. Each day we had ten hours of classes, which is way more than my friends have in their first year of university, and more than some of them seem to actually attend in a month. Although there was a lot of information to take in, the importance of what we were learning as well as the humour of our instructors made the week bearable and even enjoyable. After passing my test, I am now a qualified first responder and licensed to work on ambulances alongside medics and paramedics.

I moved to Beer Sheva, the biggest city in the Negev desert, to actually begin my volunteering alongside three other international volunteers from my programme. One of my favourite things about Beer Sheva is the diversity of the population here. As Magen David Adom provides medical service to all of Israel’s citizens without discrimination, I have truly been able to witness a full spread of people from all walks of life. I have been sent to the homes of Orthodox Jews who have photos of Rabbis on every wall, to large spacious apartments belonging to secular families, to Bedouin families in the Arab town of Rahat and to Ethiopian and Indian Jews whose wedding and Bar Mitzvah photos demonstrate the true diversity of the Jewish religion. I have also been to prison twice to take inmates to hospital in handcuffs and attended to a Thai migrant worker living in a construction site. In addition, I’ve been to more houses of elderly Russian people than you would have thought possible. Regardless of race, religion or nationality, all of our patients get the same medical treatment.

I would definitely recommend the Magen David Adom overseas programme to all those aged 18-25 and willing to spend at least two months in Israel. However anyone can help Magen David Adom by donating – and it was HEMS chosen charity in its Yom Kippur appeal. Magen David Adom receives no government funding and relies on international support to buy all of its ambulances and equipment. I have seen first-hand what an amazing organisation it is and I hope that everyone at Mosaic will give generously to ensure that they can continue the amazing work they do.